You are here:
Story 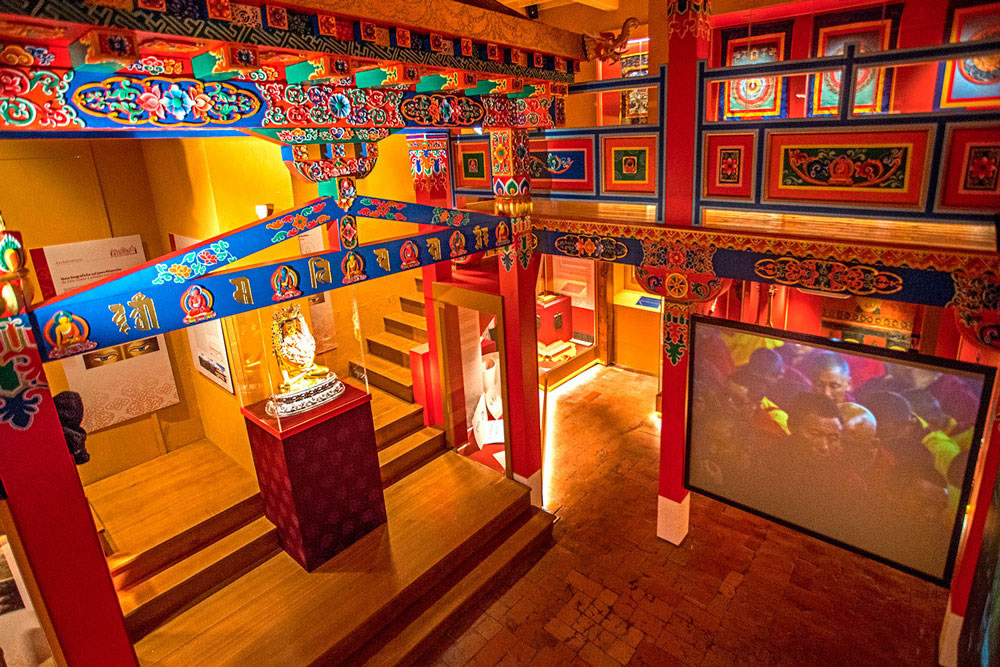 The Palace of the Chancellery, which is the new seat of the Museum of Asian Art and Culture of Arcidosso and is the subject of the Project being presented for consideration, is a one of three museums currently present in the Aldobrandesco Castle Complex in the medieval town center of Arcidosso, in the Province of Grosseto, in Southern Tuscany. The building which is the object of the Project, is situated in the highest area of the medieval town center of Arcidosso, dominated by the Aldobrandesco Tower, which is the symbol of Arcidosso. Externally, the architectural configuration of the volume remains as an integral example of 17th century castle architecture, with beautiful and rhythmic openings and a garden court with an exclusive access on the north-east side.

The first stage of research which we carried out to begin the project consisted of an analysis of “why” this project was being envisioned and eventually evolved in the Aldobrandesco Castle Complex, to help us to better understand the needs and objectives of the two principle groups of stake holders of the project.

The Museum of Asian Art and Culture of Arcidosso project, is the fruit of over 35 years of collaboration between the Municipality of Arcidosso and the Cultural Association Dzogchen Community of Merigar, a nonprofit cultural association, led by Prof. Namkhai Norbu, a retired professor of Tibetan and Mongolian languages from the Oriental University of Naples. The project arose from the desire of both institutions to find a home for the rich collection of over 5000 objects of oriental art and ethnographic artifacts contained in the Namkhai Collection.  Both the local Public Administration and the Cultural Association participated financially in the project from the beginning. Considered important for the success of the entire project, for both institutions, was the desire to use the Museum to cultivate a dialog between both communities, that is between the “Tibetan” community and the local population, to help to further intercultural understanding and harmony by overcoming preconceptions, using the Museum to help stimulate for a deeper appreciation of Asian cultural. To further this objective, it was felt that it was important to create a “living museum” experience for the visitors, in which the Namkhai Collection would be contextualized within a space which reflected the culture that had created the artifacts and works of art, held in the Collection. To accomplish this, I first conducted planning meetings with the director of the museum, his curators and engineers, as well as, with the Mayor and technical office of the Arcidosso Municipality.  We explored together various strategies and how these could best express their objectives within the formal architectonic design of the space, which had been made available to the Project by the local municipality. During this phase, we discussed together how the space could act as a container for the exhibitions planned and how and where we might consider employing various multimedia technologies to create an immersive visitor experience, which was one of the requirements of the director.

After this first phase of research, I carried out a more detailed series of “brain storming” sessions, with the director of the Museum and the curators to address “how” to realize the project. It was agreed at this stage, the need to try and select a central theme which would both offer the director a flexible conceptual framework to express the thematic gallery ideas being planned for the Collection and at the same time, suggest a visual metaphor for the formal architectonic container to hold the museum visitor’s experience.

This phase of the Project research culminated in the selection of the mandala as the central unifying theme and consequently the focus, both of the conceptual museological plan and the architectural design for the Project. This remained the overall guiding principle which was interpreted in various ways throughout the entire Project.

Considered of Indian origin (The Iconography of Architectural Plans, F.W. Bunce, New Delhi, 2002. Pg. 35) the principle of the mandala has had a wide ranging impact throughout Asian culture. The mandala is a representation of the cosmos, (microcosm and macrocosm) of paramount importance for both Buddhist and Hindu architecture. “It is the conceptual and architectonic foundation from which each and every ecclesiastic structure is based. Unlike Christianity which utilizes the cruciform plan.” The mandala, (Sanskrit: manda; “core” and la – “container”) also finds expression in traditional medicine, astrology, visual arts, geography, and of course, Buddhist and Hindu philosophy. While providing the curators with a means to focus many concepts around a central theme, this stratagem also created a multifaceted presentation of the central, mandala theme, which permit the visitor to explore the theme from different perspectives.

While the curators could integrate their exhibition planning for each of the nine thematic gallery spaces around this central theme, my team, together with the director of the museum began the final phase of research for the project, that of developing the architectonic structure, which would contain the galleries. During this phase, we chose to create a three dimensional replica of the central chapel of the Jokhang Temple in Lhasa, where the most revered image, the Jowo Buddha statue sits. The installation in the central atrium, in Arcidosso, now includes a copy of the Jowo statue, donated to the museum and cast in Tibet and later inlaid with precious and semiprecious jewels cut and set, in Jaipur, India.

The Jokhang Temple is the earliest and considered, still to this day, the most sacred architectural structure in Tibet (see: Jokhang: Tibet’s Most Sacred Buddhist Temple, Gyurmed Dorje and Andrea Alexander, London, 2010.). The installation for the main hall of the Project consists of a central atrium space surrounded by a balcony on three sides, where 6 of the thematic galleries would be installed. The central atrium was designated as the thematic gallery space dedicated to Tibetan architecture.

“The Jokhang’s building plan followed the established (tree dimensional mandala) pattern that was used by Indian civilization since … 200 BC, as a blueprint for constructing vihar temples” (and monastic colleges such as Nalanda) (Andre Alexander, op cited). This choice permitted us to utilize the renovation of the Chancellery, as one of the 9 thematic exhibitions, dedicated to traditional architecture. The curators used the space to explore the evolution of traditional Buddhist monastic architecture, while we created a three dimensional container for an experiential space which would surround the visitor. The structure which created a central atrium around which the thematic galleries were arranged, was decorated by a team of Tibetan artists. This immersive visitor experience, provided by the structure and decoration, was further enhanced by a “virtual theater” installation which partially closed the atrium on three sides, with large screens upon which videos of Tibetan landscapes, nomadic tents and monastic, exteriors and interiors are being projected. Each of these videos, specifically filmed for the installation, were filmed on location in Tibet, using three video cameras, to recreate an immersive experience for the visitor. Research on this installation was carried out with the help of Giorgio Barberio Corsetti, an internationally renown, contemporary theater and dance director, and his team.

During this final phase of the project we also designed an installation which integrated new technologies with traditional modelling methods to explore a Temple structure located 5 km from the Museum.

In addition to the social contributions of the project, within the local cultural landscape of Monte Amiata, by helping to deepen a sense of intercultural understanding, discussed earlier, the Museum Project acts as a stimulus for the interaction of the Museum within the broader context of the Monte Amiata landscape, by virtually linking the Museum of Asian Art and Culture of Arcidosso to a unique architectural temple structure, situated in the rural setting of the Cultural Association of Merigar, approximately 4 km away from the Aldobrandesco Castle Complex and medieval town center of Arcidosso.

Conceived, designed and realized by Prof. Namkhai, the structure represents a modern interpretation of the traditional architectural principles firmly rooted in the concept of the mandala explored in the Museum exhibitions (see: Il Tempio Della Grande Contemplazione: the Gonpa di Merigar, Chögyal Namkhai Norbu, Arcidosso, 2014). The Museum and the Temple structure are linked “virtually” in the last thematic gallery (9). This exhibition consists of an architectural model of the Temple structure and two navigable “virtual models” of the Temple, the first installation consists of two large monitors where the Museum visitor can “visit” and navigate within the three dimensional model and above the model, within the surrounding landscape, using a joystick. In the second “virtual model” installation, the model is “visited” with the aid of the Oculus 3D eyeglasses. The Oculus installation is also navigable with a joy stick.  The exhibition includes a map of a foot path (maintained by the Municipality of Arcidosso), from the Museum, leading to the Buddhist Center where the actual Temple is situated, as well as details about the construction and significance of various aspects of the Temple structure.

This though is not the only “spiritual community” associated with the area. During the 1800s not far from the site of the Merigar Community was the seat of the religious community led by Davide Lazzaretti (1834 – 1878). As the valley between Monte Amiata and Monte Labro, has this historic spiritual and contemplative heritage there is currently a project underway, led by the Regione Toscana to present this valley to UNESCO as an intangible UNESCO Cultural Heritage area. The hermitage of Davide Lazzaretti, situated on Monte Labro, is also linked to the Museum of Davide Lazzaretti, which is also situated in the Aldobrandesco Castle Complex, by the same foot path. Interested visitors are invited to take the short trek from the medieval urban center of Arcidosso, to these two sites, in a sort of contemporary pilgrimage through the beauty of the Tuscan landscape.  The footpath leading from the castle complex reflects the symbiotic relationship between urban and rural Tuscan landscapes, as well as the relationship between the virtual installations and actual sites. While respecting the historic facade and structure of Palace of the Chancellery, the successful repurposing of Palace, to reflect the evolving multicultural nature of the local community has encouraged the local Municipality to invest resources in the renovation and conservation of the Palace in 2017, with the help and consultation of Arch. Donatella Cavezzali, the director of the school of the Istituto Superiore per la Conservazione ed il Restauro: ISCR.

As has been mentioned previously, the traditional architectonic monastic and temple structure, was conceived as a three dimensional representation of the mandala, which defined a sacred space which itself was metaphorically seen as a palace, representing a cosmogram of the universe.  From this perspective, the dominant position of the Aldobrandesco Castle Complex, situated at the highest part of the medieval town center of Arcidosso, stratigically situated in the surrounding landscape, proved to be an apt interpretation of these ideas, translated well into the objectives of the Project.